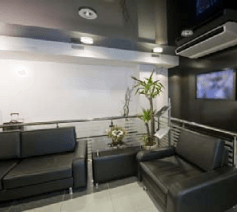 The distribution method used for the digital signage solution will be determined by many different factors as well as the requirements of the solution. The main determining factor in which type of solution should be used is the distance between the player and the display. For short runs of cable it is typically best to use the native cabling of the signal, i.e. if the content player is generating a VGA signal, then a VGA distribution amplifier and VGA cabling should be used. For short to medium runs of cable it is typically best to use a video balun, or over UTP video extender. These devices act as balanced/unbalanced signal converter and extend video signals over twisted pair cabling such as Cat5e or Cat6. It is possible to use existing cabling infrastructure with these devices. Using the existing infrastructure can save both time and money on materials and installation cost. For medium to long runs of cable it is typically best to use an IP addressable solution. This solution will allow the video signal to be sent over either a parallel network, or the existing network. An important consideration when choosing the distribution method is the type of video signal that will be distributed, either analog or digital.

Digital signals, such as HDMI, DVI-D and DisplayPort, carry Transition Minimized Differential Signaling (TMDS) which is a technology for transmitting high-speed serial data. In digital signage applications this technology is critical for supporting multi-panel video walls. A multi-panel video wall is when a number of displays are used to create a single image. Another important consideration when choosing the distribution method is the possibility of using existing cabling infrastructure. As discussed previously, video baluns and IP addressable solutions are both capable of using the unshielded twisted pair (UTP) Cat5e or Cat6 cabling.

However, in many situations, especially in schools, there will be an existing master antenna television (MATV) coaxial cable network. It is possible to tap into this network by using a signal modulator. A signal modulation device will take an input from a content player and broadcast the signal over the coaxial cable where the TVs will be able to tune to a specific channel and receive the signal. The benefits of using the existing MATV network are the time and money saved on materials and installation cost, as well as the fact that coaxial cable provides from 370 to 1,000 times more capacity than twisted pair. This capacity allows for the delivery of either static content or full motion high definition video to the displays.